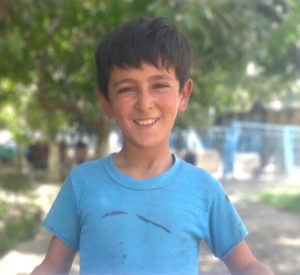 10-year-old Sayeed Safdar is one of the abandoned children in the city of Mazar-e Sharif, Afghanistan.

Safdar’s father was working as a handyman in the city, when he was killed in 2015 in a tragic suicide bombing attack in Balkhab, where he went for his brother’s funeral. After this tragedy, Safdar’s mother ended up with heart problems which prevented her from working.

Living expenses, including rent and utilities, food for the family and the mother’s medication were not getting paid and the burden of helping with these expenses was placed on Sayeed and his 14-year-old brother.

Safdar had to drop out of school and begin working on the street as a shoe polisher. Even though he worked hard trying to make a living with what he could, there were countless times when he was bullied and even times when people refused to pay him for his hard work. On many days, Sayeed’s earnings were so little that he was unable to feed himself, let alone a whole family.

In August 2017, SOC took Sayeed into our Relief Services program and we were able to provide him with some hope for his future. We encouraged him to go back to school and he is now a 3rd grader in an elementary school. Sayeed is happy about pursing his dreams and is looking forward to the future.