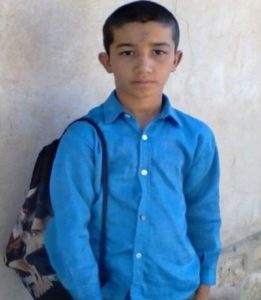 We first heard about Samim from the co-workers of his mother, Gul Jan. Later we had the opportunity to speak to both Gul Jan and Samim himself. Here is what we learned: Samim is one of four children born to Gul Jan and her husband, Noor Muhammad. Noor is uneducated and unskilled, a conservative Muslim who opposes girls’ education and does not let his wife work outside the home. He feels no responsibility for the basic needs of his children or their future, believing that if God gave him children, God will take care of them.

Samim’s mother, Gul Jan, has a completely different perspective. Despite her own lack of education, she wants to take responsibility for her children so they can have a good education and a future. However, Afghanistan’s strict patriarchal society demands that she obeys her husband.

Several years ago, low income and a series of loans submerged the family into financial problems. Unable to deal with the crisis, Noor Muhammad turned to drugs as a means of income. Over time he was forced to work with the drug mafia, and eventually, to better his prospects, he left his family and went to another province. For three months, Noor sent money to his family. Then the money quit coming, as did any word of Noor. That was three years ago.

Samim’s brother, as the oldest male child, took responsibility for the family when his father left, getting a job as a waiter in a restaurant. Samim’s brother would bring leftover food home from the restaurant to feed his family as well as his paycheck. However, he also made some new friends at the restaurant who introduced him to heroin. In the face of his overwhelming problems, he turned to heroin and after a few months, became addicted. As the addiction continued its course, Samim’s brother could no longer provide for the family; he became a burden instead.

The family’s mounting financial problems forced Gul Jan to disobey her husband. She had to find work outside the home to feed her children, despite her poor health and lack of education. She eventually found a position as janitor, but her income provided only food for the family. She could not afford school-related expenses, clothing, or toys.

Samim wanted to help. He wanted to drop out of school and find work at a store. But Gul Jan would not allow it for fear of Samim following in his brother’s footsteps. Then the decision was taken out of her hands when she became ill and could not work for several weeks.

Samim did drop out of school, but at 10 years of age, he had trouble finding anyone to hire him. Finally, he found a job as a laborer, and then a store owner hired him as a part-time vendor in the downtown area. He made about a dollar a day. The job was dangerous and difficult with the street mafia controlling the downtown area. Samim was harassed daily, sometimes sexually, by adults and older teens inhabiting the street, but he could not fight to protect himself, and had no one to protect him. Samim lived a life of hopelessness and pain, uncertain of the future. His situation deeply troubled his mother. Gul Jan knows her son is in danger, but her illness and the family’s need for money have tied her hands.

With our relief services program, Source of Compassion was able to help Samim with food and basic needs, so he can return to school for a full semester. The results of this temporary relief for Samim were both positive and beneficial.