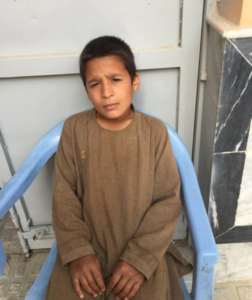 Sair’s father, Mohammad Daud, was a rich business owner and his family had a pretty good life, but that all started to change when he became addicted to heroin. As his habit took its course, he would spend every cent he could on drugs, eventually losing his business, house, and everything else. His craving for heroin superseded the needs of his family. He would force his kids to go out to beg or collect money from people to support his addiction. Only the heroin kept him calm. Without it, he would come home angry, hit his children, and make their life a living hell.

Mohammad’s health deteriorated along with his hygiene. Sometimes he would stay out overnight, hanging out under bridges and behind trash heaps. One summer, his family grew worried when he did not come home for two days and nights. They looked everywhere for him without success. Finally, another addict told them that Mohammad had an accident and had been taken to the hospital. Sair’s mother, Zolekiha stayed up all night worrying and waiting. Early the next morning she went to the hospital and learned that Mohammad had died—his body was already at the morgue. Zolekiha felt lost. Unsure what to do, she asked her relatives and neighbors for help with her husband’s funeral.

Zolekiha felt very alone. Everything seemed dark to her, yet she felt responsible for her life and that of her children. She began looking for work, hoping to send her kids to school so they could have a better future. She eventually found a job as a tailor’s assistant, but her salary barely covered the groceries. There was no way she could afford to send her children to school.

Her oldest son decided to help out by joining the military. Every month he sent his paycheck to his mother, but less than a year after he enlisted, war broke out and he was killed.

As the only other boy in the family was Sair. He was forced to find work to help care for his mother and two sisters. At nine years old, the only job he could find was begging. From early morning to late at night, he would walk the city streets asking for money, but he would usually only collect enough for a few pieces of bread. Sometimes, worn out from begging, he would fall asleep on the street.

Sair always dreamed of clothing and food. He would see other kids out and about and think, “Oh, how I wish I had a father to help me and buy me school clothes so I can continue my education,” or “I really wish my life was better,” or “I wish I could make my mom happy.” All these happy dreams seemed beyond his reach.

Source of Compassion was able to help Sair with food and basic needs so that he could return to school for a full semester.