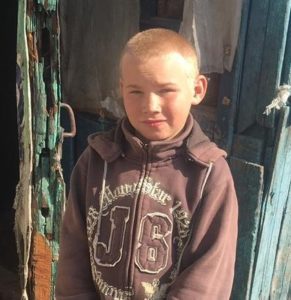 Artyom Kononenko and his siblings were orphaned in 2021. Their father, Tahir, was a drug addict and eventually introduced his wife Marina to drugs as well. The kids have lived in constant fear because their father was an aggressive man, but a year ago he disappeared and nobody has heard from him. There are rumors that he has died.

Since 2015, Marina has suffered from the closed form of tuberculosis. She both refused to be treated and was denied the opportunity by Tahir, who helped her escape from the hospital on multiple occasions.

But finally, in 2021, she died of her illness and drug abuse, leaving her children alone. They watched her die, choking on blood. The children are now afraid to sleep alone and mourn for their mother.

They are left under the care of their grandmother, Valentina. She has very limited finances and is struggling to support them. Artyom’s siblings are able to go to school, but there is not enough left for him to attend as well. He wants to go to school and so is working hard now. He studies at home by himself without teachers and without help, but his hope is still strong that support will come, and he finally is able to go to school.

The situation of the Kononenko children and their grandmother Valentina is far from good. The living conditions are not good, and they don’t have the money they need for food and medicine. But there is hope.

We are now sponsoring Artyom and his sister Daria. Read her story here.