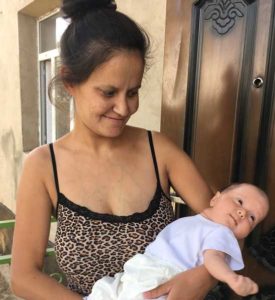 Alisa’s mother passed away from addiction and TB, then Alisa started to smoke and drink at a very young age, due to peer pressure. The smoking and drinking lead her to quit school and she found herself at the local bars. With no sources of income, Alisa resorted to selling her body so that she can pay for her addiction and became a prostitute. With the life of prostitution came the combination of various drugs such as cocaine and marijuana, with her ever-present alcohol addiction. Then one day she found out that she was pregnant and so she decided to have an abortion, but she decided she was unable to because of lack of time and money. The abortion period passed, and the baby grew in her womb. She lost her clients at the bar, and so she started to work the streets. She had decided to give birth to the baby and then dump the baby somewhere where someone could find it.

On a very rainy day, she was sitting on the steps of a four-story apartment to wait out the rain, when Sergey (who lived in the apartments) saw her. She was drenched with barely any clothes to cover her from the cold and was very pregnant. When Sergey heard her story, his heart went out for this girl. He provided her with food and clothes. Then Sergey took her to his Safe House for women and after few weeks there she had her baby. In September 2017, when the SOC team went to see the safe house in city of Dushanbe -Tajikistan, the Maryam was only 40 days old. The mother and the child are both living at the safe house. Alisa has stopped drinking and is now looking for a job. However, both the mother and the child need additional treatments. The baby is believed to have Fetal Alcohol Syndrome. It will cost for their health checkup and treatments. The Source of Compassion management has determined to help Alisa and her child Maryam through the Relief Services program for their medical examination and treatment.